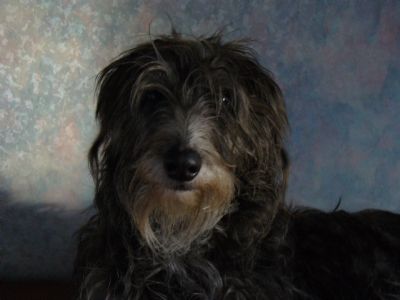 Francesca was one of a litter of two, however, her sister died within hours of being born.  She had quite a traumatic start to her life, nearly losing her life a few times over those first few days, but she was a fighter and hung on in there.  Her mother didn't want anything to do with her at the start, luckily granny Krystal took on the role of foster mother, washing and cleaning Francesca, even down to producing milk.  Eventually Kerry did start to take some responsibility, albeit grudgingly.  Having no siblings and spending all her time with us and the "grown ups" she became very spoilt, but oh what a character she was, so much fun in such a small bundle.  I have owned some clever deerhounds and some not quite so clever, mentioning no names of course.  However, Francesca was scaringly clever and I can say without a doubt she understood almost everything I said. 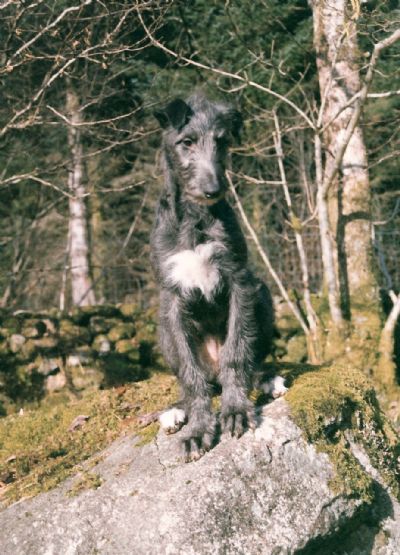 Francesca liked to sit on top of a rock so she could survey her surroundings.

I kept a puppy, Doune, from Francesca's first (and only) litter, intending to keep a bitch from a later litter.  For one reason or another, holidays, successful mating but no puppies, unsuccessful attempts - she never had another litter.  Luckily both Alison Morton and Belinda Playford have daughters of Francesca and bred from them and I have Merlin and Evie from these litters - Francesca's grandchildren.  Evie is made up of every naughty gene Francesca possessed and Merlin has all the good ones!

Francesca and Bruich trying to catch a quick game in the snow before it melted.  We don't get snow here very often so they have to make the most of it when it occurs.

Francesca and Mindy, very much a "hate hate" relationship.

My friend, Betina Adams (Ardneish Deerhounds) was up for a few days one year and we decided to take a picture of Francesca running, ha ha ha she had other ideas.  Betina is trying to walk with Francesca on ahead, but Francesca was absolutely determined she was not going to leave me behind and refused to budge until I caught up with her, I think we eventually gave up.

Give us a kiss - absolutely not!

Francesca and Bruich.  The picture below (and the other one further up in the snow) was taken just a few weeks before we lost her.  I remember thinking this will probably be the last time she sees snow, I must get a picture of her playing in it, they do so love snow and we get it here very rarely so I have to make the most of it.

Hurry up and take the picture, I'm bored. 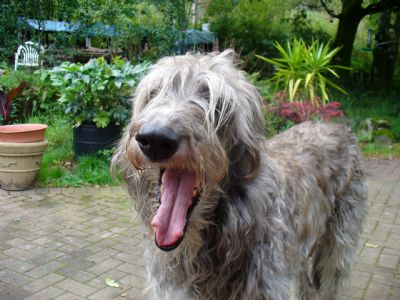